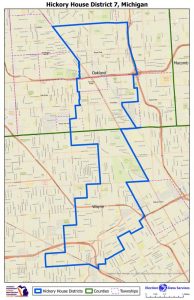 I have loved representing 60,000 Royal Oak neighbors over the last four years, and I am eager to take on the critical issues facing the 93,000 residents in the 7th district at the state level. In Lansing, I will fight for higher wages, strong and safe public education, an equitable justice system, and immediate action on climate change.

I will work tirelessly to defend our democracy and guarantee everyone can exercise their right to vote. And I will stand strong to protect a woman’s right to choose in Michigan, so critically important now in the aftermath of the U.S. Supreme Court’s overturning of Roe v. Wade.

I am looking forward to meeting as many residents as I can to learn their concerns so we can work to make a great place to live even better! Follow me on Facebook (see below) and consider volunteering or donating.

Candidate page for Melanie Macey, candidate for the Michigan State Legislature for the newly-drawn 7

This message is only visible to admins.
Problem displaying Facebook posts. Backup cache in use.
Click to show error
Error: This Page access token belongs to a Page that is not accessible. Type: OAuthException

I am so grateful to have the endorsement of my State Representative, Jim Ellison, the incumbent state rep in Royal Oak and Madison Heights. Jim has been a wonderful mentor to me in addition to being a champion of progressive causes in Lansing. Jim has done the work at the local level and the state level for a long time. He is good at building relationships and making his case. He knows what the job truly entails, and I am honored that he believes I will be a good state rep. … See MoreSee Less

Crystal A. Proxmire of Oakland County Times has been inviting all candidates whose races touch Oakland County to do these interviews for many years! Thank you to Crystal for your hard work in keeping voters informed. … See MoreSee Less

I was so pleased when I received the endorsement of the incomparable Oakland County Commissioner Charlie Cavell this spring, and I’m even more grateful now that I know it comes with some sweat equity! Many thanks to Charlie for knocking doors with us yesterday! I wish we had gotten a picture with the whole crew, but we didn’t think to take it until the end when we were chatting back at Charlie’s house. Charlie is a true progressive, and he works his butt off, so already I love that, but I think the true magic of Charlie is how he brings people into the conversation. Maybe it’s from his social work background that he learned how to listen intently and then turn people’s passion into action, empowering them to step up and do the work right alongside him. It’s a whole movement, and Charlie is an empathetic leader we can all get behind. I’m not trying to drive votes; he’s unopposed in the primary! I’m just letting you know about an excellent elected official in our midst. (District 19: Ferndale, Pleasant Ridge, Berkley, and Huntington Woods, and parts of Birmingham and Royal Oak) … See MoreSee Less

This Independence Day hits a little different. We are less than two weeks from Roe v. Wade being overturned, leaving my daughters with fewer rights than I had. We just learned an unarmed Black man in Akron was shot over 60 times when fleeing a traffic stop. The January 6th hearings bring weekly doses of a deliberate effort to overturn our Democratic system. And, today, somebody with a gun turned an Independence Day parade into a tragedy outside Chicago. As we gather to celebrate America, it is easy to ask “What Is America?” Or, legitimately, “Why are we celebrating it?” I’m running for State Representative because my answer to those questions is the same. America is *us*, and we celebrate that messy *us* every day that we argue and cry and protest and hope and ACT so that we can fix our problems today on behalf of the children of tomorrow.Our history has been a constant struggle between those who want to expand equality and opportunity to others against those who want to limit it. Sometimes we make progress. Sometimes the progress is beaten back. We must always keep fighting to live up to those ideals. With the Supreme Court so central to our lives right now, I think it is appropriate to quote from the great Thurgood Marshall, in a speech given on Independence Day in 1992 — just six months before his death. “We cannot play ostrich. Democracy just cannot flourish amid fear. Liberty cannot bloom amid hate. Justice cannot take root amid rage. America must get to work. In the chill climate in which we live, we must go against the prevailing wind. We must dissent from the indifference. We must dissent from the apathy. We must dissent from the fear, the hatred and the mistrust. We must dissent from a nation that has buried its head in the sand, waiting in vain for the needs of its poor, its elderly, and its sick to disappear and just blow away. We must dissent from a government that has left its young without jobs, education or hope. We must dissent from the poverty of vision and the absence of moral leadership. We must dissent because America can do better, because America has no choice but to do better.The legal system can force open doors and sometimes even knock down walls. But it cannot build bridges. That job belongs to you and me. Afro and White, rich and poor, educated and illiterate, our fates are bound together. We can run from each other but we cannot escape each other. We will only attain freedom if we learn to appreciate what is different and muster the courage to discover what is fundamentally the same. America’s diversity offers so much richness and opportunity. Take a chance, won’t you? Knock down the fences that divide. Tear apart the walls that imprison. Reach out, freedom lies just on the other side. We should have liberty for all.” www.naacpldf.org/press-release/thurgood-marshalls-stirring-acceptance-speech-after-receiving-the-… … See MoreSee Less